17 Apr, 2020 5:19am
When he appeared on BBC Breakfast World War Two veteran Captain Tom Moore had raised just over £1,000 for the NHS. Since then he's received messages from around the globe. Video / BBC

A 99-year-old Second World War veteran has raised more than £15m ($31m) for the British National Health Service by walking 100 laps of his garden using a zimmer frame.

Captain Tom Moore, who turns 100 on April 30, wanted to complete the challenge at his home in Bedfordshire before his birthday to support medics on the frontline the coronavirus crisis, who he says are "national heroes".

The former tank commander had set a target of £1000, which he reached in just 24 hours, but went on to raise an astonishing £15,381,605 for the NHS Charities Together organisation as at 6am (NZT). The total is still increasing. Captain Tom Moore's original goal was a modest £1000 but his fundraiser caught the imagination of the British public and he has smashed that goal. Photo / via AP

He has received multiple messages of thanks from NHS workers, sports personalities and politicians.

The funds raised by Moore will be spent on well-being packs for NHS staff and for kitting out rest and recuperation rooms.

It is expected electronic devices to enable hospital patients to keep in contact with loved ones will also be purchased, and some of the money will go towards working with community groups to support patients once they are discharged from hospitals.

Who is Captain Tom? 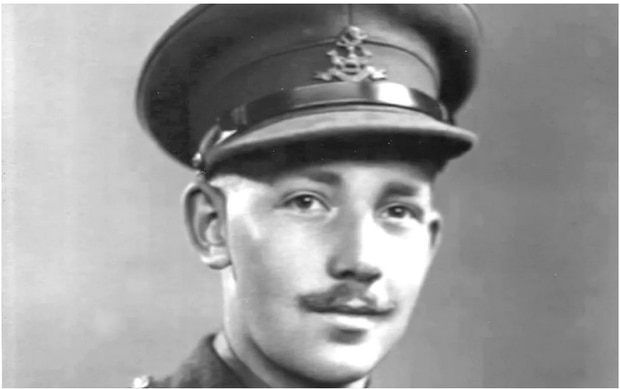 Moore served in one of the battalions of the Duke of Wellington's Regiment that had been converted to operate on tanks as part of the Royal Armoured Corps.

Born and brought up in Keighley, Yorkshire, Mr Moore went to Keighley Grammar School and later completed an apprenticeship as a civil engineer.

He enlisted into the eighth battalion of the Duke of Wellington's Regiment (8 DWR), an infantry unit that had been converted to operate Churchill tanks as part of the Royal Armoured Corps (RAC).

Selected for Officer training in 1940, he rose to the rank of Captain and served in 8 DWR (145 RAC), later being posted to 9 DWR in India.

He served and fought on the Arakan, western Burma - nowadays renamed Rakhine State - and went with his Regiment to Sumatra after the Japanese surrender.

On return to the UK he was posted as an Instructor to the Armoured Fighting Vehicle School in Bovington. 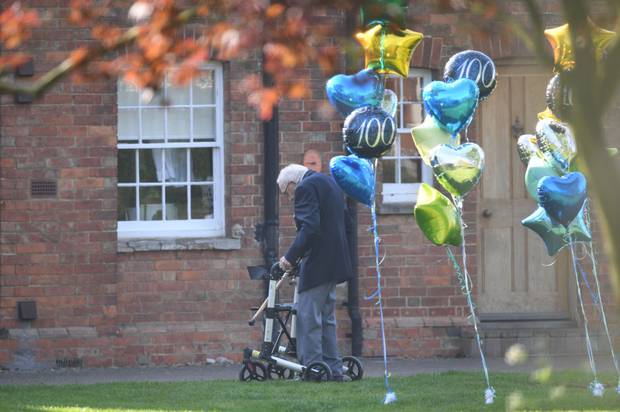 Captain Tom Moore, a 99-year-old veteran, completes the 100th length of his garden at his home in Marston Moretaine, Bedfordshire. Photo / Getty

Moore has received treatment in recent years from the NHS for skin cancer and a year and a half ago had an operation after suffering a broken hip. He told the BBC he had received "such marvellous service", particularly from nurses.

"The patience and kindness that I got from all of them, top to bottom, was absolutely amazing," he said.

"They've done so well for me and they're doing so well for everybody else at the moment, that I think we must say 'well done National Health Service'. They deserve so much more than we can possibly give them."

Asked for advice as to how the nation can get over the current coronavirus crisis, Mr Moore said it was important to always think that "tomorrow is a good day".

"Tomorrow you will maybe find everything will be much better than today, even if today was alright. That's the way I think I've always looked at it. Tomorrow will be a good day."

How did he complete the challenge? 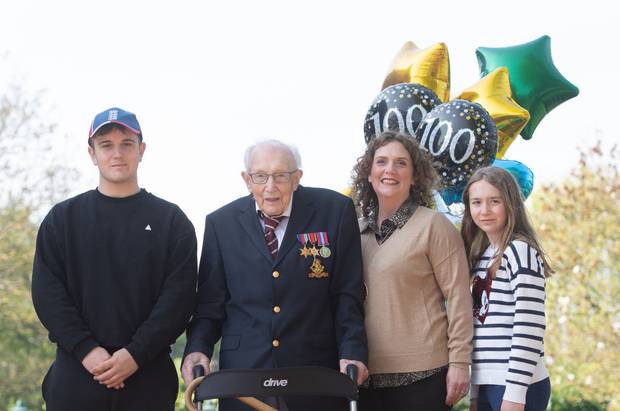 Tom Moore, with his grandson Benji, daughter Hannah Ingram-Moore and granddaughter Georgia, at their home in Bedfordshire, after he achieved his goal of 100 laps of the garden. Photo / Getty

Moore's daughter, Hannah, who he has lived with for 12 years, said her father is a "typical Yorkshireman" who is "very stoic and controlled" and "takes everything in his stride".

She said he is an early riser and his morning routine would start with letting the dogs out of the house before settling down to read the newspaper.

Later in the day, he embarks on his regular 10 laps of the driveway and garden, an endeavour he started the weekend before Easter. Captain Tom Moore, a 99-year-old veteran, received a guard of honour from the 1st Battalion of the Yorkshire Regiment on completing his 100th lap. Photo / Getty

Captain Tom said he finds walking difficult but others "have it a lot worse".

"I can get about slowly [but] most people don't want me to run about too fast," he said. "I can manage and will continue to manage as long as I possibly can."

His daughter added: "We always knew that he was this incredible gem of a man, but we never had any idea that his story would capture the hearts of the nation.

"We thought we could give people a little bit of happiness and we wanted to share a little bit about him, and it has just gone beyond even our wildest, wildest dreams."

Thanks to nzhearald.co.nz - to watch the video and read the article https://www.nzherald.co.nz/world/news/article.cfm?c_id=2&objectid=12325409